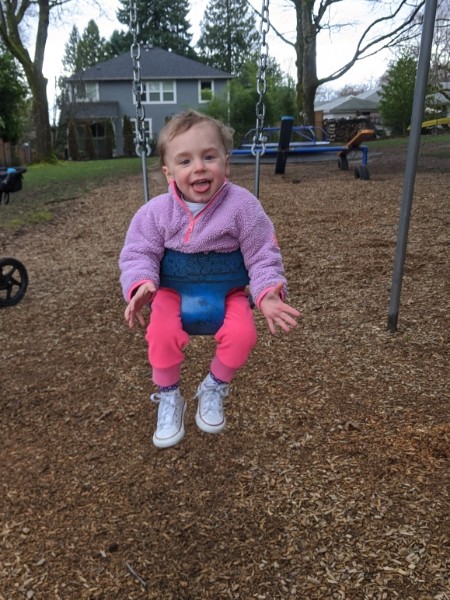 It still feels so strange to say, “We have a diagnosis.” After over 4 years of wondering what was different about Fern we finally have an answer.

Here is my best effot to offer a (very watered down) summary of what brought us here, and to catch those of you up with whom we have come to know in the past 3 or 4 years. In March of 2016 I was 11 weeks pregnant with Fern, when we discovered an increased Nuchal Translucency and after a CVS  (Chorionic Villus Sampling) were strongly encouraged to consider termination and given odds of a less than 8% positive outcome. After lots of tears and prayer we came to conclusion that there wasn’t really any question for us. Our family made the decision that night to believe that Fern would be a miracle. Slowly, over the next 8 weeks we watched as the swelling around her neck and body slowly resolved. During her anataomy scan we discovered a minor muscual VSD (Ventricular Septal Defect) but as far as we could tell, mostly everything was normal-ish. The stress and anxiety of weekly sonograms, NST (nonstress test) and appointments left me with gestational hypertension and after failing a NST, I was induced at 37 weeks. My labor and delivery with Fern was honestly probably the single most normal part of my pregnancy. I don’t recall her numbers but her initial Apgar score was lower but was not ever a topic of concern. Outside of a echocardiogram, Fern didn’t need any extra testing and we were home from the hopsital a few days later with our perfect baby girl. The first 6 weeks at home were blissful but sleepless and my undiagnosed post partum anxiety was pretty intense. It wasn’t until about 6 months later that we started to notice that Fern wasn’t meeting developmental milestones (not smiling, not rolling over, not sitting, etc.) and were referred to a developmental pediatician. From there we invited the genetics and neurology teams to the party, added PT, OT, Speech, Feeding Therapy and Early Intervention and our journey jumped into hyperspeed. The next 2 years were a blur, a series of appointments, tests, bloodwork, countless ER visits… and very slow but steady developmental growth. Fern’s neurologist ordered an EEG and MRI after a series of seizures and we added seizure protocol to our arsenal. Genetics has tested for thousands of known conditions associated with Fern’s primary diagnoses: hypotonia (low muscle tone), global developmental delay, hyporeflexia (absent reflexes) and seizures. Each test came back with normal results or the dreaded, “variant of uncertain significance.” (AKA. We can see that something is different… and it’s interesting… but we don’t know WHY.) Meanwhile, Fern’s development has progressed at a consistent, albeit slow, pace. She’s now close to taking independant steps (she can take 2-3 and has a personal record of 7!), is doing some free standing, can isolate a pointer finger. She can say some vowel sounds (most A and U), can communicate “up” and “all done” with nonverbal communication and can follow one-step instructions. Fern has taught us so much but especially how to slow down and celebrate each and every milestone. It is such a privilege to watch how hard she pushes herself to master things that come so naturally to neurotypical kiddos and we are SO proud of her. I also can’t say enough how thankful I am for the amazing team of providers we have assembled. Without such caring and dedicated individuals Fern wouldn’t be making the progress she has and I would be clueless in my role in her therapies.

Over the past year our genetics team had asked us to consider Whole Exome Sequencing (WES) as the only sensible genetic testing option. WES is considered investigative testing and is not covered by many insurance companies, including ours. Our genetics counselor also shared with us that although we would be sequencing all of Fern’s exome (the protein-coding regions of genes in the genome) that there was about a 60% chance that we would find nothing of value, a 20% chance that we would find a mutation that fit into the “variant of uncertain significance” category and a 20% chance that we would find a gene mutation that had been recognized as a disease or condition and resulted in a diagnosis. We ultimately decided to move forward with testing, understanding that it was likely that it was still a long shot that we would walk away with real answers. Sequencing itself is quick, but analysis took over 3 months and two weeks ago we got a surprising phone call. We have a diagnosis.

Fern has TBCK-related encephalopathy, a rare neurogenetic disorder. It is an autosomal recessive disease, meaning it is caused by genetic mutations usually carried by both parents. There are only about 35-40 reported cases worldwide. TBCK syndrome causes a wide range of symptoms and from what we can tell there is a lots of variation with how impacted children are. Like Fern, kiddos experience moderate to severe developmental developmental delays and low muscle tone, seizures, absent reflexes, and hypercholesterolemia. TBCK was discovered in 2016 by Dr. Xilma Ortiz-Gonzalez and Dr. Elizabeth Bhoj at Children’s Hospital of Philidelphia where they are currently working to better understand TBCK and identify possible treatments.

Honestly, the past few weeks have been a whirlwind of emotion and processing. We have an appointment this monrth with the genetics team to go over the results and better understand where Fern fits on a very broard spectrum of symptoms. In the meantime, we are doing our best to not jump down the very small rabbit hole that exists with researching on our own. Mostly likley our therapies will stay the same and day-to-day life will look no different than it has for the past couple of years. Since this is as much as we know right now we are immediately staying focused on what we can do to continue to help her grow and develop.  Obviously we are doing our best to avoid respiratory illnesses (as Fern is at higher risk for secondary complications due to her hypotonia), we will continue with weekly therapies (OT, PT, Speech) and Early Intervention and continue to monitor her closely with food and water. I imagine that there will likely be more testing reccomended by Fern’s neurologist in the coming weeks and we will get connected to the patient registry at CHOP to start to look into treatment/studies available.

We are so thankful to have friends and family who have continued to support our family on this journey. We are feeling both relieved and anxious to learn more about this next chapter. Hopefully we will have more to share in a few weeks. There are very few places to find more information but here are a few resources we have found helpful if you’d like to know more: